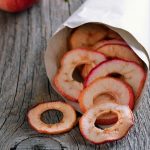 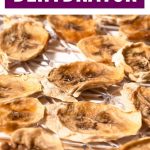 Disclosure of Material Connection: Some of the links in the post above are "affiliate links." This means if you click on the link and purchase the item, I will receive an affiliate commission. Regardless, I only recommend products or services I use personally and believe will add value to my readers. I am disclosing this in accordance with the Federal Trade Commission's 16 CFR, Part 255. This site is a participant in the Amazon Services LLC Associates Program, an affiliate advertising program designed to provide a means for sites to earn advertising fees by advertising and linking to Amazon.com

See also: Bringing a new appliance into the fold? Here’s the proper way to clean your fridge before the dust settles.

Where to Start? The Best Stainless Steel Dehydrator

Nomads, soldiers, explorers, farmers: for them and many others, keeping food edible beyond its natural life has been a key concern way before refrigerators were in anybody’s mind. The practice of dehydrating food has been around for millennia, with several proven benefits: your food is less bulky, less heavy, and you can rely on it to nourish you for a long time, no matter the season. From the 1940s onward, food dehydrators have proven vastly superior to the use of sunlight, saltwater or smoke, for the following reasons:

Four are the key parts of a food dehydrator: heating element, which generates the heat; fan, for air circulation; vents, the exit route for the air and moisture; and trays, where the food rests as it is dehydrated.

They chiefly diverge on the orientation of the air flow —vertical or horizontal—, which pretty much determines the appliance’s entire design.

1. Stacked: They are so named because the trays are placed one on top of the other, like a tower. The fan is on the base, sending the air upwards and out through the center channel at the top; the trays have a hole at their center to help with air flow. These are good for saving space, and you can even expand their capacity by purchasing additional trays separately. However, they do tend to require swapping trays constantly since the air touches the bottom tray more directly, with the one at the top being at a disadvantage.

2. Shelf: The category where most, if not all, stainless steel dehydrators fall. This one does not stack its trays; rather, they slide in an out, much like an oven. The heating element and the fan are placed in the back; this way, the air flows horizontally across the entire surface, instead of having to rise through it, which makes the entire process much more thorough and efficient, so much so that there is no need to swap trays. They are also more versatile, to the point that you can use them to make fruit leathers, or remove some trays in order to create space for bulkier items.

It may be tempting to just use your oven to dehydrate your foodstuffs: after all, it’s right there and, at a glance, it’s exactly the same as a shelf dehydrator, right? Short answer: it’s not so simple! For starters, an oven’s primary function is cooking, not dehydrating. Even when set to ‘Keep Warm’, an oven’s temperature will be way higher than any level optimal for dehydrating (which also varies depending on the food); there’s also no fan, which means no air flow, and therefore no way for the food’s moisture to leave the chamber. Because it runs much hotter, an oven will also consume much more power; whereas a dehydrator, by design, will apply exactly the level of heat optimal for the food you’re processing, while only using as much power as necessary to get the job done.

It works with air flow, which technically means you can use it to dehydrate food, even if it’ll still draw way more power than a dehydrator would. Should you choose to go this route, it is important to remember that the heat must be carefully regulated; this is usually done by keeping the door ajar and constantly monitoring temperature levels.

First, there’s the looks: an appliance made in this material will invariably lend a modern, stylish look to any area where it is located. It’s more than that, though: stainless steel is sturdy, very long-lasting and naturally resistant to corrosion; for dehydrators in particular, this makes them remarkably adept at handling acidic foods and, therefore, the best for your safety!

Other Factors To Keep In Mind

The more trays it has, the more food you can fit in, both in volume and variety.

Certain models are better at keeping sound to a minimum than others. It’s worth noting that stainless steel dehydrators tend to be among the quietest.

It may come with plenty of bells and whistles, but it will be of little help if you have to invest extra time learning how to utilize them. A user friendly panel is preferable to a long list of bonus features that are unnecessary or hard to understand. Temperature adjustment is important too: being able to set it by actual degrees is generally better than a simple Low-Hi system.

Picks For Your Perusal

The “quiet” is not just in the name: experiences reported with this unit point to it running with barely any noise, which is always a plus. It’s not wanting in terms of capacity, either: a total of 10 stainless steel trays can be occupied in one go. Timer goes between 30 minutes and 19 and a half hours, and temperature can be adjusted in any of 8 settings, 95°F being the minimum and 167 the maximum.

The included accessories are another potential perk: 10 mesh liners, as well as a drip tray, are part of the package.

This one’s big: weighing at a full 32 pounds, its measurements are 20″ depth, 16.5″ width and 14.5″ height. Capacity is 10 trays, all made in 304 grade stainless steel. A stainless steel drip tray and a cookbook with over 250 recipes are included.

Temperature goes between 97 and 165°F. The timer can be set in 5-minute increments, something uncommon for this type of appliance; however, it can only run for up to 15 hours, which may be constraining.

A word of caution: per the manufacturer, the dimensions of this unit are often overlooked. Aside from accounting for its volume, there should be enough counter space to set the appliance a minimum of 12 inches away from any wall, to ensure proper air flow and avoid overheating.

Its 6-tray capacity may not be anything to write home about, but quite a few features help make up for it. The package includes 1 mesh screen and 1 fruit roll sheet, as well as a 50-recipe booklet, and the digital panel greatly simplifies operation. Although its temperature range is the average for appliances of its type, 95 to 165°F, its 1-degree increment is all but unseen in similar appliances. Another uncommon capability is that of the timer, which can go for as long as 48 hours before automatically shutting the unit off.

Operation is generally considered to be fairly quiet. All trays and liners are dishwasher safe.

This one is fairly average, and more affordable than many others. Controls are not digital, and can in fact feel simplistic: one button, and one dial. It is a bit bare in terms of features, but it does come with overheating protection. Capacity is 6 trays, each measuring 11″ x 15″, and 2 non-stick sheets are also included.

Temperature can be set between 95 and 158°F; this maximum value could be considered barely in the safe zone for certain foods, such as jerky.

There are many appliances out there that are bigger, but for your counter this one is hard to beat: for a pretty reasonable price, you get a good number of accessories, as well as a decent array of recipes to try. It’s a well-built unit, which also runs very quietly, operated by digital touch panel and with temperature adjustment that few if any appliances can outdo. Its timer is something else worth mentioning, as hardly any other unit of this type will have a top limit of a full 2 days. It’s sleek. Functional. Reliable. It is, quite likely, just what your kitchen needs.

See also: Keep the action going no matter where you are in the kitchen with these iPad mounts!

Join us on Social 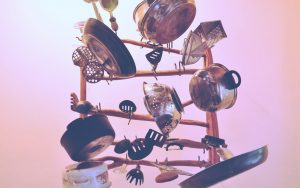 Essential Gifts for the Beginner Cook 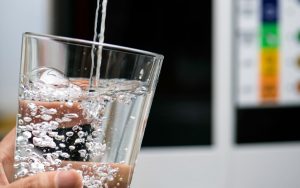 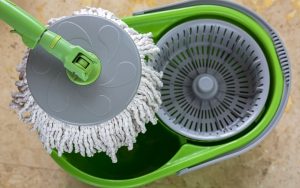 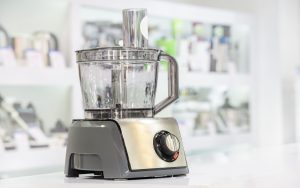 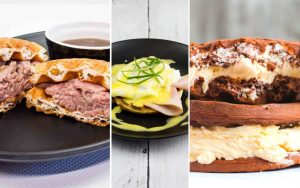 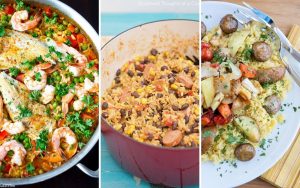 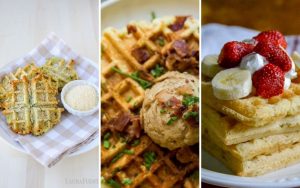 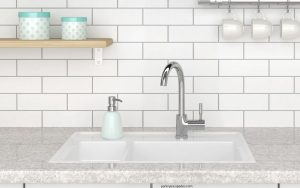 How To Select A Kitchen Faucet

This website uses cookies to improve your experience while you navigate through the website. Out of these, the cookies that are categorized as necessary are stored on your browser as they are essential for the working of basic functionalities of the website. We also use third-party cookies that help us analyze and understand how you use this website. These cookies will be stored in your browser only with your consent. You also have the option to opt-out of these cookies. But opting out of some of these cookies may affect your browsing experience.
Necessary Always Enabled
Necessary cookies are absolutely essential for the website to function properly. This category only includes cookies that ensures basic functionalities and security features of the website. These cookies do not store any personal information.
Non-necessary
Any cookies that may not be particularly necessary for the website to function and is used specifically to collect user personal data via analytics, ads, other embedded contents are termed as non-necessary cookies. It is mandatory to procure user consent prior to running these cookies on your website.
SAVE & ACCEPT
46 shares
Scroll To Top